Ladies and Gents, meet the Cast and Crew behind ASOT:

Casey May, voice of Eren Jaeger, Reiner, Sarge and many, many others!
Ravenous beast and ultimate class clown, Casey May is a lifelong Columbus resident who was destined to play the role of Eren Jaeger. Growing up as a rage-filled, attention-starved child was actually the perfect training for the role, and he wouldn’t have it any other way. In addition to Slap, Casey has been involved in many productions around Columbus and is currently performing at Madlab Theatre. In his spare time Casey can be found annihilating fools in fighting games (“any of them”), fury-punching a hippopotamus in the face, and training for his eventual showdown with Mecha Hitler. It’s gonna happen, and he’s gonna need your support. Nazis are no laughing matter. 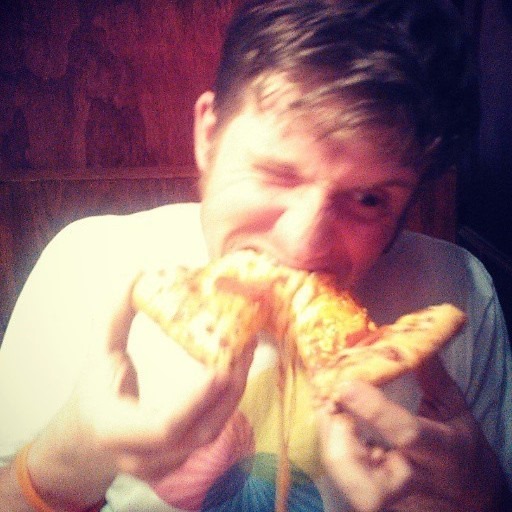 The voice of good ole Gunther, Daniel Johnson is a skilled improv and voice actor from Columbus, OH. You’ll often see him throwing swag bags at parties, firing t-shirt cannons for crowds, and generally making any and every event brighter.

He has a lifelong passion for gaming, leading to his many collaborations with KJ (voice of Colossal Titan) for Playlegit. Look for him to debut his much-anticipated Snotty High-British voice in future episodes! 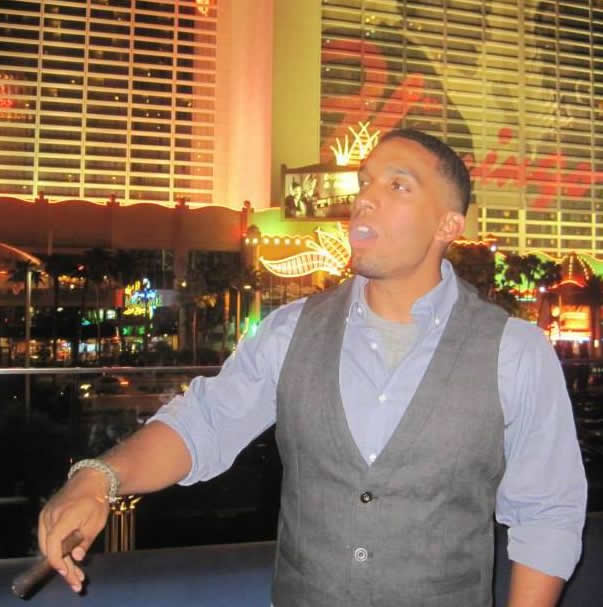 Derrick White is a musical prodigy and all-around comedian. He’ll make you laugh yourself sick then play a bass line so deep your mother swoons.

When he’s not shouting belligerently into the mic for literally all of his characters in Slap, you can catch him playing local shows with his incredible band, Brujas del Sol.

Check them out at: 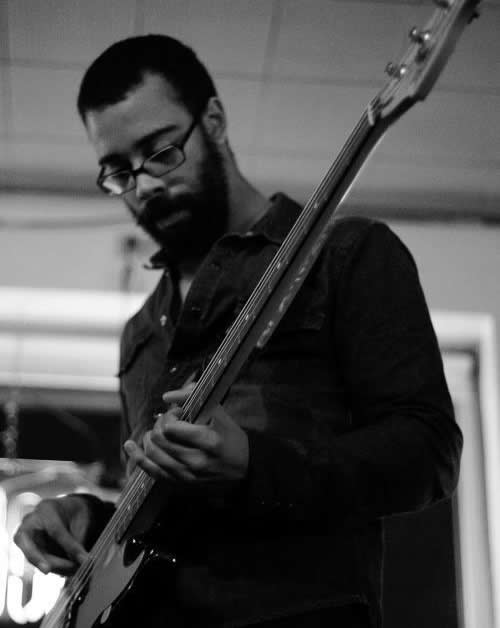 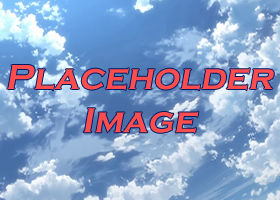 Bio: Growing up in Puerto Rico, Hector constantly disappointed his parents by showing no interest in sports. What he WAS interested in were TV and cars, which got him into a lot of trouble in his teens when he took to the underground Puerto Rican street racing scene…but that’s a different story.

Hector moved to mainland US in 2007 and has been here since. He has a huge passion for acting and comedy but never pursued it until 2013, when he was cast as the voice for Connie and the Double-Rainbow Titan in our show!

Since then, he has found a dream he didn’t know he had, and has been pursuing acting projects around Columbus. With roles in small films such as Pushing Skeeter, Janitor Cop and End Transmission, he hopes to take his talents onto bigger projects and one day, step on all of his fans’ faces. Because he cares. 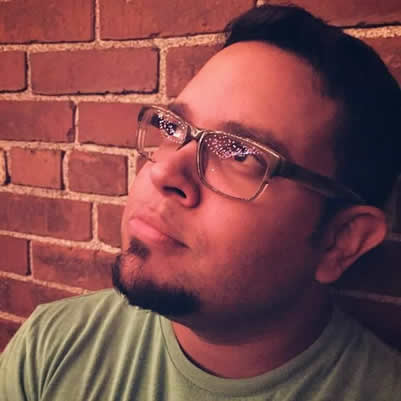 Holodeck literally fights financial terrorism. For real. She is like Jack Bauer with an encyclopedic knowledge of spreadsheets. When she’s not saving the world from certain ruin, she is involved in activities as varied as trapeze, opera, and dance. Despite having never voice acted before, she was thrilled to join up with ASOT and went on to deliver knockout performances as Sasha, Hanji, and the Narrator. She loves discovering the best local food, attending industry conventions, and getting down with all things geeky. She one day hopes to run Interpol, which when combined with her love for anime, virtually guarantees that Europe will eventually employ police mechs. AND THEY WILL JOUST FOR YOUR AMUSEMENT! 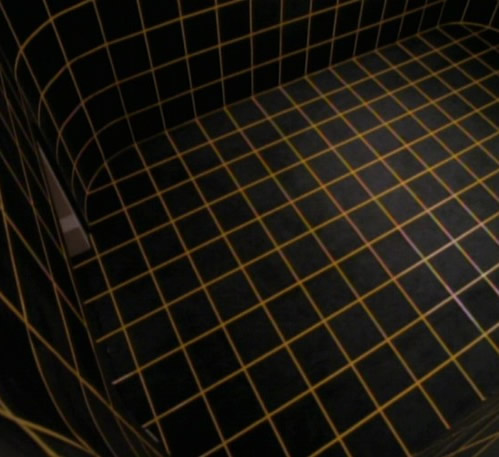 Ira Descence is a nihilistic unicorn hailing straight from 1920’s Paris where she joined Owen Wilson and the Fitzgeralds in a drinking match and wound up in 2018. Not to be outdone by the general mediocrity of the universe, she does not limit herself to one creative expression. She is a jack of all trades, choosing to let out her frustrations in the forms of piano, ukulele, drawing, graphic design, painting, acting, voice acting, podcasting, and screaming into the void. She also likes to take her cat for walks while her dog watches jealously from the window.

In her podcasts with Matt Goshert, they drink heavily and scream into microphones for an hour and a half about nothing peppered with Mountain Goats lyrics. Their friend Josias is their only subscriber. 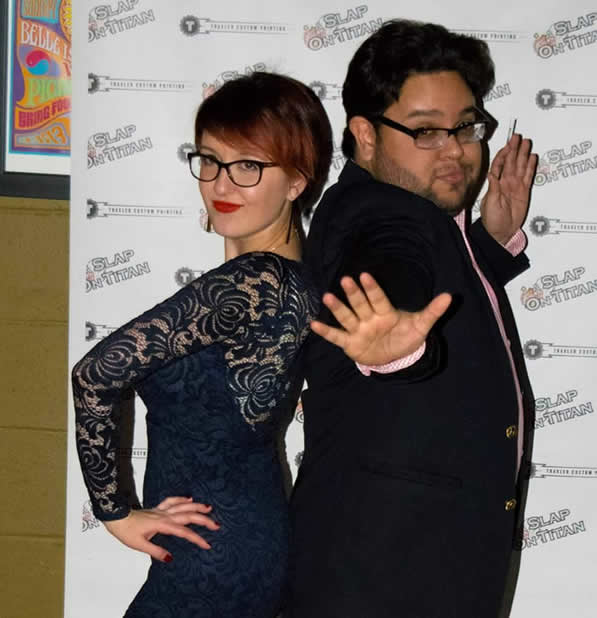 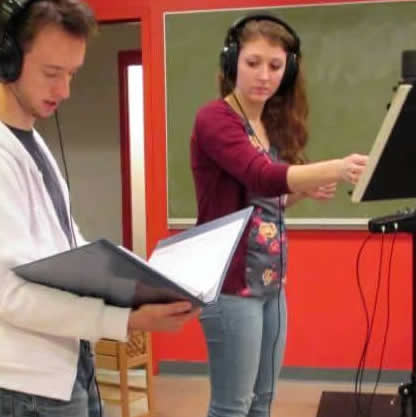 If Tom Andre is the “Slap”, then Jason Johns is the “On”. Jason has a small bit part in Slap on Titan, ya know, just editing half of the first 3 episodes, all of episode 5, most of 10, 11, and 13, and a little crown jewel known as the Pixis Puke scene. Little stuff. Oh, and he voices Jean, Hannes, and a couple others.

When he’s not guiding the team’s adrenaline fused, sleep deprived depravity into a conduit of barely digestible entertainment slurry, he works as a sleep deprived, vapid, beer-hungry video producer whose only goal is to create media that furthers his nihilistic and avant-garde agenda.

Having worked as a video producer for online education at top tier public universities for 12 years (i know, weird right?), Jason should by all means have a well rounded education and an intellectual capacity rivaling that of some PhDs… however a proclivity for the absurd and a love of all the things that make nighttime fun has left him with little more than basic computational skills and and an obsession with John Carpenter films.

That being said, Jason loves to work with his good buddies and an ever expanding network of professional oddballs, making short films and concocting extravagant schemes for future feature length films and TV series. Look out Golf Channel, we’re comin’ for your broadcast rights. You can currently find him running from bees in Illinois, filming funny stuff in Ohio, or ordering yet another drink from the bar. 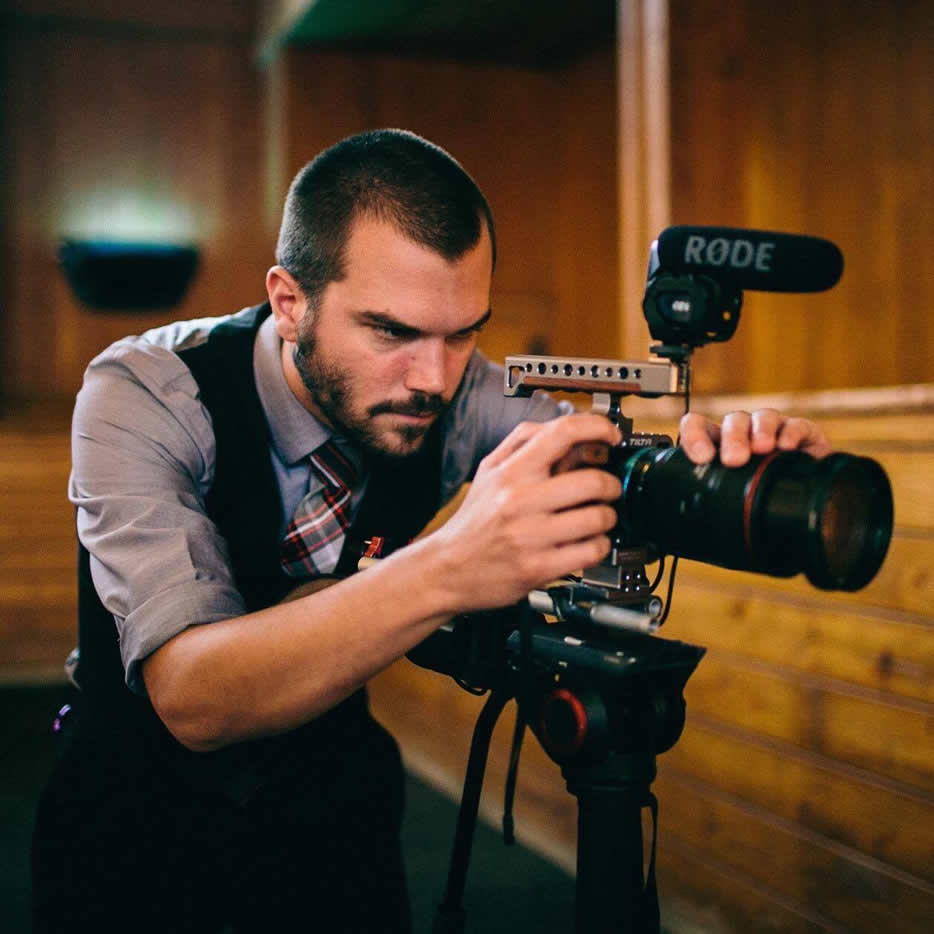 You know him as the infamous voice behind the Colossal Titan, The Ascot Man, Marco, and bitter old Oluo.

KJ has been all about martial arts movies and video games since he was born. He currently runs the Columbus-based Playlegit.net and can be found anywhere a gaming system is set up.

If you run into him at Ohayocon, don’t be surprised if you see him blasting hip-hop (“anything pre-autotune era”) and suplexing superpowered mutants. He swears he’s a 2x WWE Champion. 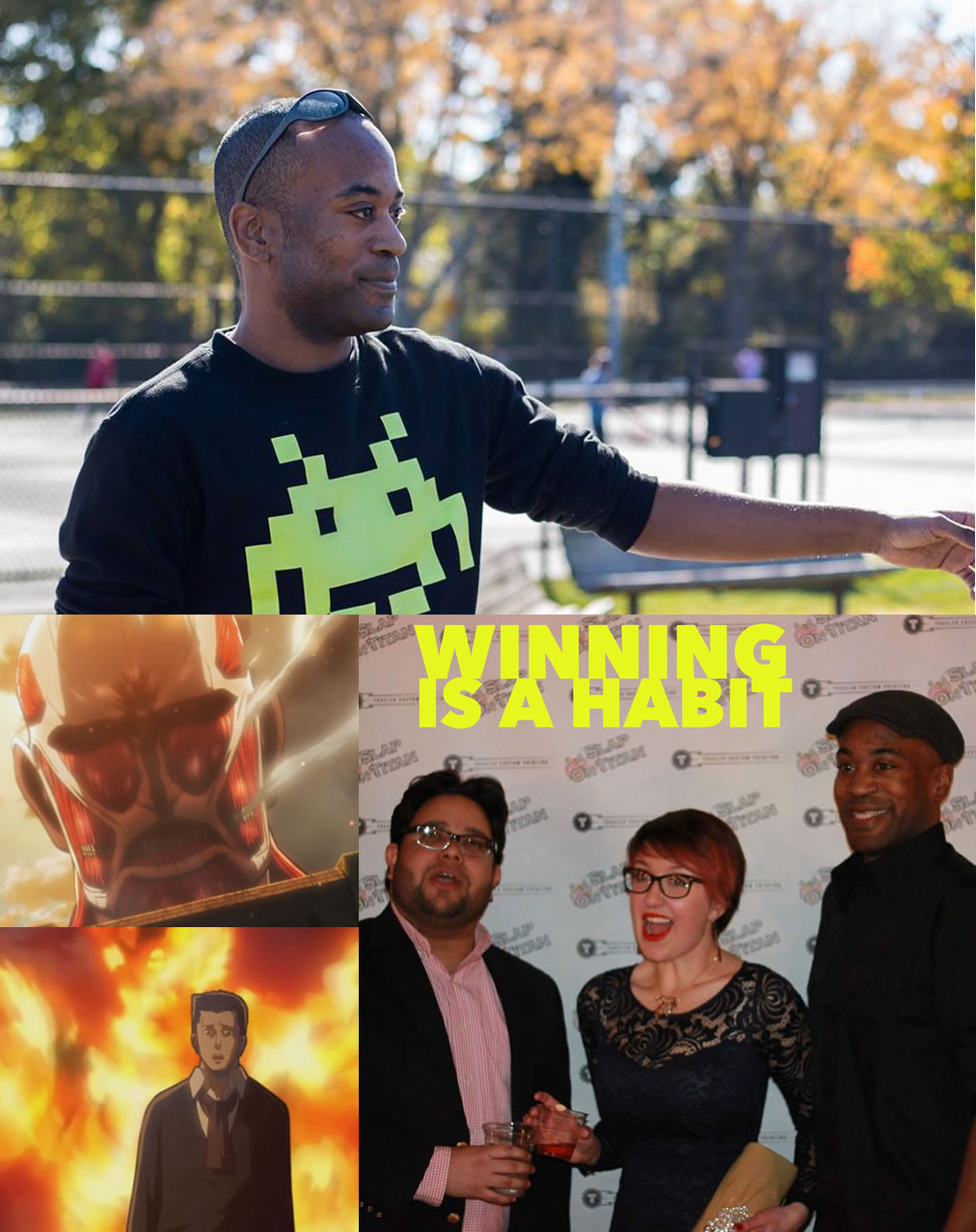 Lyn-Elíz Bergs is a Columbus based costume maker, cosplayer and model with a passion for anime, manga, gaming and hair color. She one day hopes to talk her husband into accepting her inevitable marriage to Link, the Champion of Hyrule and Hero of Time.

While she is relatively new to voice acting, she has been screaming obscenities into empty rooms for years so it wasn’t much of a stretch.

You can check-out her Cosplay & Modeling via: 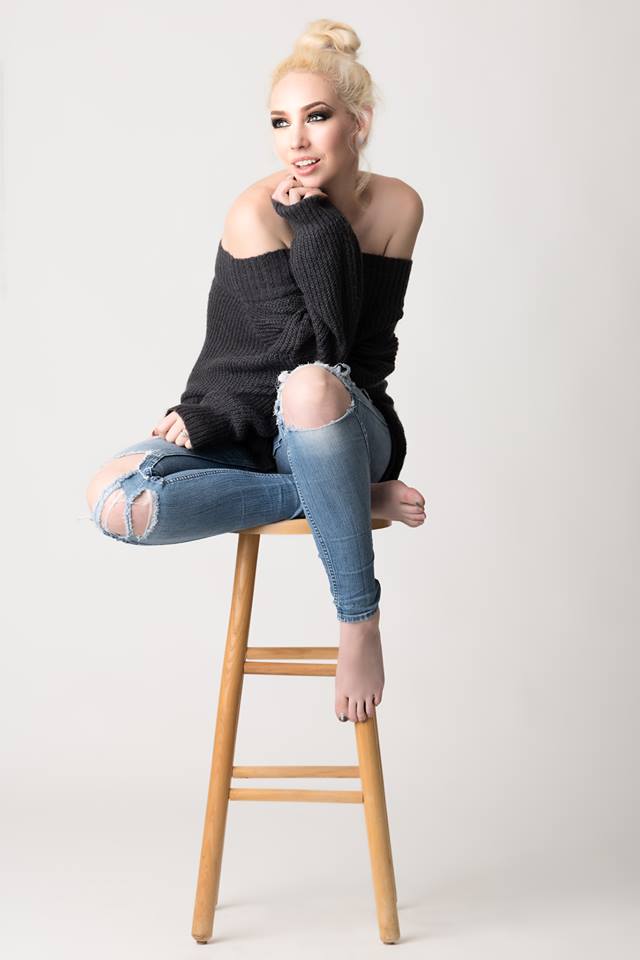 Bio:  Matt was born in the wilds of rural northern Indiana sometime between 1527 and 1983 (time works kind of funny with him.) He has one sibling whom we shall only speak of in hushed tones, due to the Gypsy curse incident.
He spent most of his formative years helping out with the family business. The primary function of the business was whittling large sticks in to smaller sticks. This business yielded an inverse level of profit vs futility. At the ripe age of 15 he got his first gig in radio and did that for 13 years until it got boring. He currently hosts the Massive Report Podcast, a weekly Columbus Crew podcast available on Stitcher and iTunes. 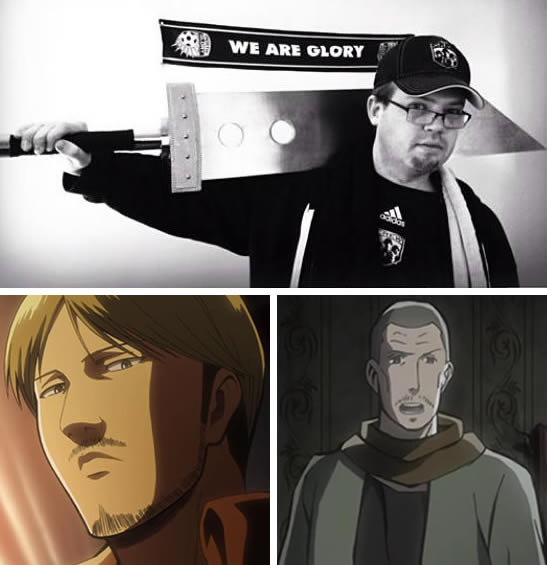 Rickie is a skilled programmer, grad student and international panda smuggler. He primarily functions as a production coordinator, but also assists in writing (he takes damn good notes!) and is adept at quality control. The words he speaks frequently make it into the show; a surprising number of Armin lines are things he shouted at Tom Andre one day.

He also is knowledgeable about a number of technologies related to video production and uses his skills to assist Slap’s special effects wizardry. He dreams of one day being a mad scientist, and being a damn good one! He also looks just like Shaggy, making him the easiest Slap Crew member to find at a con.  Zoinks!

You will likely stop thinking of me soon but here I will remain, so, therefore, I must exist in reality.

Writer, actor and director. Jack of all trades and master of none. Tom Andre is a man of many things. He might also be Batman.

In all things serious, it has been a wonderful journey to bring what started as a silly hobby into fruition as a full-blown show. He counts himself eternally blessed to have ridiculously talented friends willing to lend their voices to the series (aka scream into a mic for hours). For him, Slap is a labor of love that keeps giving back. Seeing all the positive comments and appreciation for ASOT has been such an incredible experience that he can’t really imagine doing anything else. While the professional world may frown at the antics of anime parodist, he loves every minute of it and hopes to keep doing this for a long time to come. 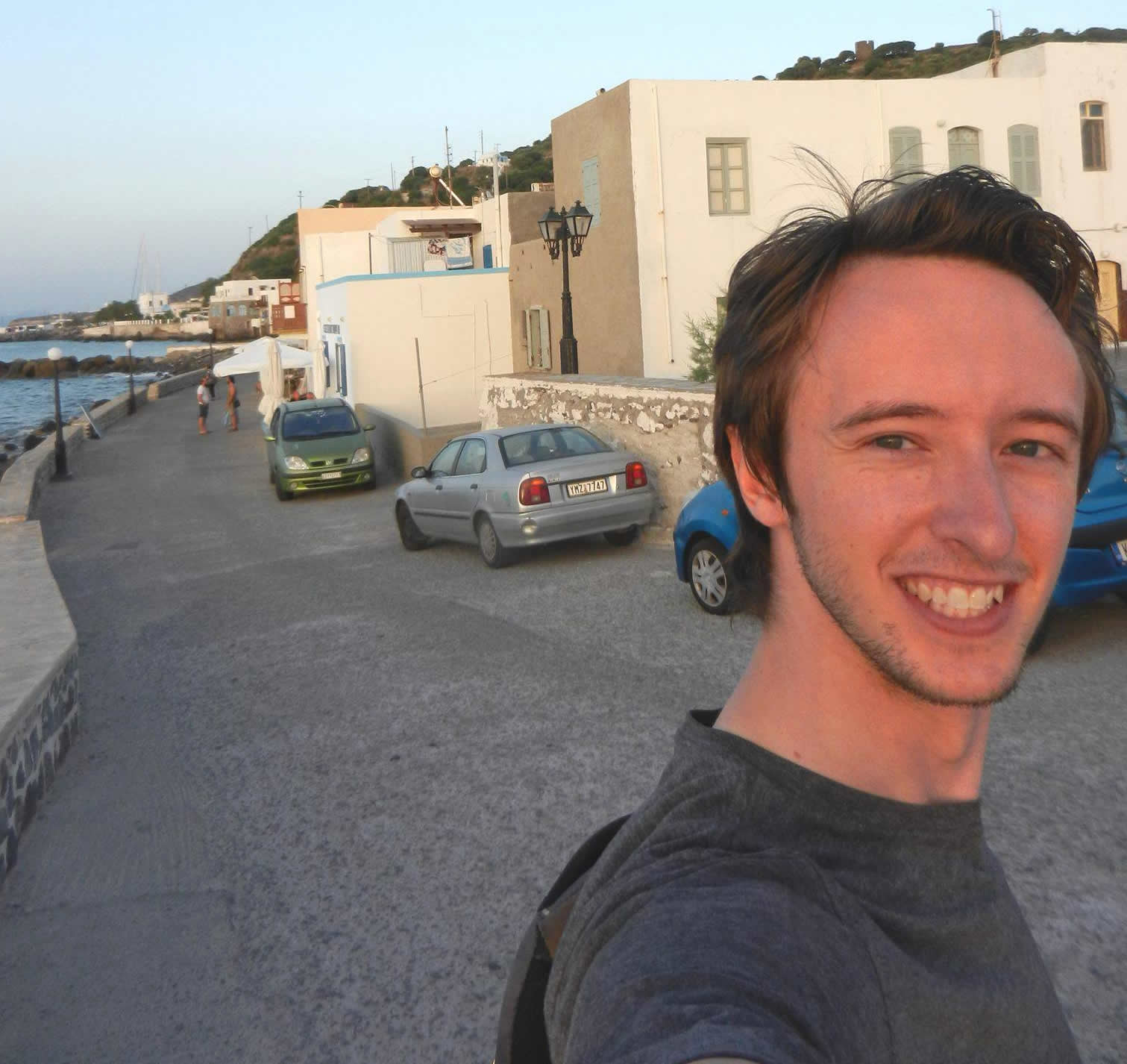 Uriah is a die-hard fan of all things satire and parody. So it was only natural that he’d windup joining-in on the abridging farce. Especially when you manage to run into those kind of like-minded individuals in your city.

While always having that nostalgic feel, from days of sparsely watching Toonami whenever he could at a relatives house, attending various conventions over the past years had rekindled his love of the anime genre. Modern shows such as Attack on Titan became new favorites, ontop of the old ones like Dragon Ball Z. You can usually spot him as ‘that guy wearing a DBZ Scouter’ at every convention.

So after attending Slap’s first-ever panels, from the local Armageddicon convention, Uriah was an instant fan. Fast-forward a few months and the virtually non-existent Slap Website had a new Admin, one that would build it into what you see today.

Apart from web development, you can still find Uriah gaming some in his downtime but only on the filthy-casual level these days. 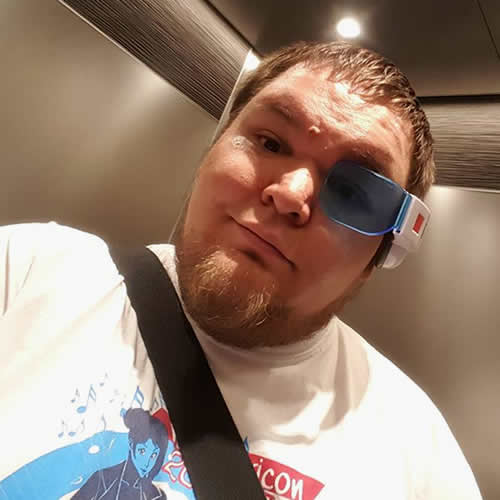